As you can probably guess I’ve been absent from the blogosphere for a while, mainly due to being rather poorly during my pregnancy. It’s not been an easy ride by far with issues from start to finish; including having a negative blood type, to having hyperemesis gravidarum that lasted 35 weeks, threatening miscarriage, a dislodge pelvis and finally preeclampsia.

And let’s not even speak about all the other delights that go along with being pregnant in general such as extreme fatigue and the fact that your get up and go has got up and gone.

So no – I have not been my usual productive self, and my writing has suffered for it.

But it is all worth it. I know its cliche but it’s true. Having a baby is by far and without doubt the best thing I have ever done. And I cannot express my thankfulness to my darling husband for helping me to bring our little miracle into the world.

I am so very pleased to introduce my son, my joy – Seth. 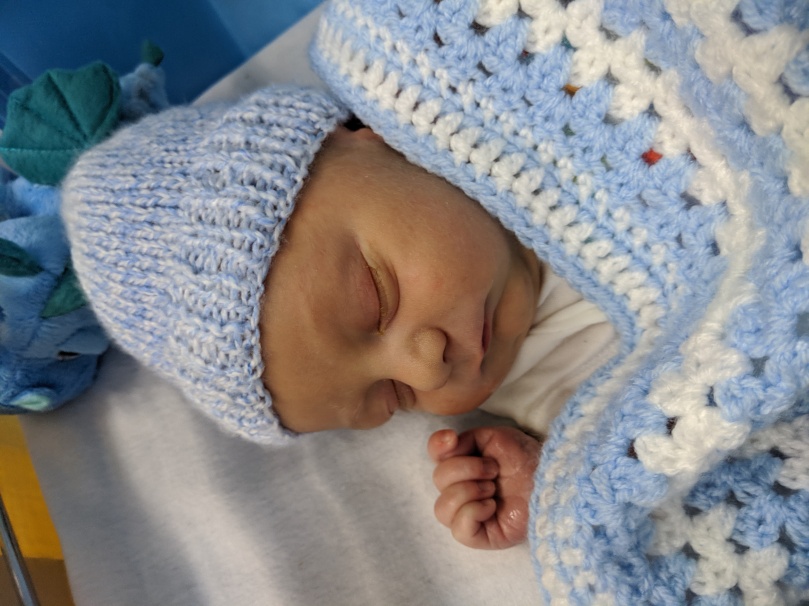 I know I am biased but isn’t he a cutie? I sure think so! This is one very proud mummy here!

But it’s not been all fun and games for my little man. And whilst we are both fine now, things were a little hairy for a while there. So, with that in mind today I would like to share Seth’s story, as he came into the world and the first week of his life.

Before I start, however; a disclaimer. This is just my labor experience and should not be substituted in any way for professional medical advice. I divulge this information for entertainment purposes only. If in doubt or if you have any concerns about your own pregnancy or pending labor, please, please, please – consult your midwife or GP!

Baby boy was running four days late on us and having been in a transverse breech position only a week previous, I had agreed to have a sweep and aromatherapy treatments to see if we couldn’t get things moving. Thankfully by this time baby had turned but when I got to the appointment the thing we had been dreading the most my entire pregnancy manifested.

Now, why was I so worried about this. Mainly due to my own birth being extremely early due to what was then known as toxemia. I was born by emergency cesarian and weighted 2bl 10ounces at birth and had to spend the first three months of my life being tube fed in an incubator.

And back to our story…so needless to say, as we were within the 40th week of gestation when the blood tests came back positive for preeclampsia the doctors wanted to book me in for an induction for two days later.

Little did they know that it would be a wasted appointment. For no sooner then we arrived at the hospital did I start having some rather odd Braxton Hicks.

Now Braxton Hicks was no stranger to me at this point. In fact, I had been having them regularly since about week 24 but these felt different. I mentioned it to my husband but we didn’t get our hopes up as we had had too many false starts already. Add to this the worry of preeclampsia results pending and I had a fair enough distraction.

But the pain kept edging up and three hours later when the results were in I mentioned the cramps (now to the point of not being able to stand straight and every four minutes). The midwife checked and said it looked like the very start of things but that if I did by some miracle deliver before my induction it wouldn’t be by much.

So they sent me home.

This was at eight o’clock in the evening. By midnight I was begging to go back to the hospital. The pain was so severe and every two minutes by this point. But when I rang the hospital they, of course, dismissed me, thinking perhaps that I was just a wimp when it came to pain as I had only been 1cm on examination.

I waited another hour and called back, thankfully getting the midwife whom I had seen earlier on the phone. She had noted the pain I was in then, and hearing the distress in my voice said I should go back in for pain relief if nothing else.

When we got there, they checked again. 3cm this time. Not enough to be kept in as the NHS recommendation for established labor is 4cm. However, I was in too much pain and due to its frequency, the midwife admitted me.

Long story short, after feeling my tummy and noting the pains the doctor started talking about c-sections because of preeclampsia. But first some pain meds. By this point I was using the gas and air like an iron lung, as the paracetamol, I’d been given at 8 o’clock was well and truly not working. I hadn’t wanted an epidural but when offered it I jumped at the chance. If I was in this much pain at 3cm what was ten going to feel like!

However, when the anesthetist arrived and prepped me I started feeling very strange. The poor man literally had the needle in my back when I told the medical staff I felt like I needed to push.

Of course, once again this was dismissed with a laugh and who can blame them. However, seeing my distress once again my lovely midwife checked and beggars belief I was at 10cm. All talk of cesarian ceased. It was go time!

Half an hour later my baby boy’s head popped out with the umbilical cord wrapped around his neck. This was by far my worst nightmare come to life but somehow I was able to hold it together (thanks to my rock of a husband) to stop pushing long enough for the doctor to free my little boy and he was delivered safely only two and a half hours after arriving at the hospital.

I’d never been so happy in all my life! Even when they told me I had to go in for surgery because my placenta wouldn’t detach. I didn’t care. I wasn’t concerned for me – I never was. I knew going into pregnancy that I was willing to go to hell and back in order to deliver a happy healthy baby. My only worry at that point was my little one, that he was alright, breathing fine and had no issues from being born so fast.

But he had ten fingers and ten toes, a sweet face, a loud cry and was by all accounts as healthy as could be.

And so reluctantly, two hours after Seth was born, despite their best interventions up until that point to get things moving chemically, I was whisked off to theatre.

Turns out my epidural hadn’t taken at all, so I then had to have a spinal block and an hour and a half later I was reunited with my new little family.

The following hospital stay had its ups and downs. Despite my best efforts to get back on my feet that same day, I was kept in due to the surgery and the sheer amount of stitches I had to have (yuck!) and then to once more top it off – Seth developed jaundice when they were ready to let us go.

The next few days were excruciatingly difficult for me – watching my little boy who was struggling to attach whilst breastfeeding due to tongue-tie, baking under a heat lamp, uncomfortable and just wanting to be held. And oh how I just wanted to comply!

We also had issues with another rather disruptive patient but I won’t go into that. All I will say is she was enough of a handful that not only did she interrupt my baby feeding so much that he stopped trying for a while, but that the poor staff ended up having to move me from my ward (there was only the two of us) and in effect rescue me and my baby whilst taking other actions.

After that though Seth managed to start feeding again and after 6 days in the hospital, countless blood tests and hours under the heat lamp, his jaundice was gone and we could finally take our baby home.

And that’s the story of our week in hospital; from labor to liberty. And it’s been bliss ever since. Yes, we have still had our challenges; after all, a baby with tongue-tie is always going to struggle with breastfeeding but it’s all about perseverance and he’s had his surgery now so all good on that front. We are still trying to settle into a routine and there are daily struggles such as little sleep and trying to get things down with a screaming baby but my husband and I couldn’t be happier. Seth is improving every day and has now started to put on a good amount of weight after losing quite a bit under the heat lamp.

He is the perfect little boy I have always longed for. I can’t thank my lucky stars enough for the miracle of him and my husband in my life.

Before signing off on this blog (as I’ve rambled enough) I would just like to make mention of the NHS staff, the midwives in particular. Though I won’t mention names or even the hospital I was in, I would like to give them the highest praise. Every single member of staff I had dealings with was professional, polite and so damned caring you would have thought I was their only patient. Almost all of them went above and beyond with our care, taking time to talk to us, taking interest in Seth as his own little person rather than just another baby in their care. They really were amazing and we had special moments with our appointment midwives all along the way. So to anyone reading this who is in the medical profession and the NHS – it’s not said enough but thank you for the job you are doing. You make a world of difference and I for one appreciate you so very much.

One thought on “Introducing My Baby Boy”

Join 575 other subscribers
Follow a gentlewoman and a scholar on WordPress.com

All other times I am contactable via e-mail and the form under the Contact Me tab.

On the top of our Christmas tree this year we have had a puppet snowman ⛄ as choose by my soon-to-be-three-year old son and frankly, I've looked it!
Who would have thought it 🤔Gimli loves Brussel sprouts 🐹🧡🌱
It was recently Sage's 1st Birthday and I just love how adorable she looked in her little dress. Such a sweetie 💕
Everyone, meet Lyca 🐶 she's the latest member of the family. She's a 2 year old Nenet Herding Laiki which we rescued from Russia. We've been waiting for six months to give her a furever home and she arrived last night...isn't she lovely?